If you stand in the middle of Tirana’s vast Skanderbeg Square and turn 360 degrees, you will see Italian fascist architecture, buildings in the Russian and Chinese communist style, a mosque, an Orthodox Christian church, the gleaming glass rectangle of the Tirana International Hotel and the bleak carcass of the unfinished Archea tower.

Tirana doesn’t follow the pattern of most European cities. The square is in the middle, but there is no city centre as such, and no major shopping street comparable to Regent Street or the Rue de Rivoli. Nor is there the familiar conjugation of chain stores – no Zara, no Mango, no Nando’s or McDonalds.

Everything about the city feels haphazard. And now one man is charged with bringing it to order.

Tirana’s lively, chaotic urban fabric reflects its extraordinary history. In 1912, Albania won independence from the Ottomans, only to be occupied by Mussolini’s fascists in 1939, then liberated by the communist militias who ushered in a repressive and paranoid regime under the personality cult of Enver Hoxha. For 45 years, it was a Balkans version of North Korea.

Under Hoxha the country was totally isolated, falling out even with the comrades in Moscow and Beijing. Anyone who tried to leave was shot as a traitor. So when the regime finally fell in 1992, opening the door to freedom of movement and free-market capitalism, people – understandably – went a little bit crazy.

Albanians emigrated in huge numbers, mostly to neighbouring Greece and Italy. For those who stayed, the first thing they did with their newfound wealth was to buy a car. In 1992 there were 200 cars in Tirana, all allocated to the Hoxha nomenklatura; today there are 200,000.

The second thing they did was build – houses, shops, shacks, kiosks – anything and anywhere. As there was no private land, it was open season, an unregulated building spree that city authorities have been trying to deal with since the boom went bust and they were faced with a disorderly, car-choked city. 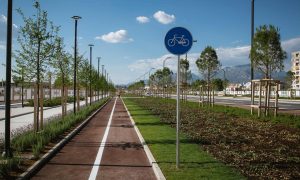 Tirana’s population has quadrupled in 20 years, from around 200,000 in 1992 to 800,000 today – though the unofficial total could be as high as 1 million. The average age is 27; Erion Veliaj, the mayor, is 38. He won the 2015 mayoral election by a landslide as the Socialist party candidate, joining the ranks of Europe’s radical mayors alongside Ada Colau in Barcelona and Virginia Raggi in Rome. The worst anyone seems to say about him is that he’s too slick.

From Edi Rama, the former mayor and now Albanian prime minister, Veliaj inherited Tirana 2030: an ambitious plan intended to sort out the urban chaos. Devised by the Italian architect Stefano Boeri, it speaks of turning Tirana into “a kaleidoscope metropolis” ringed with an orbital forest of 2m trees and green corridors along the city’s three rivers. The plan is to build up rather than out to accommodate the still growing population.

As per the stylings of the architect, Tirana 2030 is made up of three elements: a metropolitan “fresco” based on 10 major themes (biodiversity, polycentrism, diffuse knowledge, mobility, water, geopolitics, tourism, accessibility, agriculture and energy); an “atlas” composed of 13 strategic projects located in the real landscape and a “chart” of rules formulated around five metabolic systems (nature, infrastructure, city, agriculture, water).

If Boeri’s Tirana plan sounds grandiose and often vague, Veliaj insists it will serve a practical purpose. “We can’t afford urban sprawl because we can’t afford a metro, which costs €300 million per kilometre,” he says. “The plan is to create density but with quality.”

“We want to avoid the Corbusier [method] of building a lot of social housing on the outskirts, which is a bad approach if you want people to participate in the city,” adds Joni Baboci, the city’s head of planning and urban development.

Critics claim that, with an urban core population of 10,000 per sq km, the city is already too densely populated and that building blocks of flats will only exacerbate the problems of traffic jams and overcrowding. Veliaj refutes this, pointing to research that shows mixed-use density leads to more bike and foot traffic. The city is flat, and the climate benign; Baboci points out that in the car-free communist era, the bicycle was the main means of transport.

Veliaj is pragmatic, and focused on making tangible improvements to the city. For example, he points to the conversion of Skanderbeg Square, which had become little more than a vast traffic island, into the largest pedestrianised space in the Balkans – “a destination, rather than a place of transit”.

As well as creating open spaces and playgrounds, they are trying to tackle traffic congestion by building cycle paths and improving public transport. “The more projects we do like the square, the more they synergise with each other and create a network of spaces that make the city more friendly,” says Baboci. “The square is also a signal to people about how we think the city should work.”

The mayor is criticised for what some see as a top-down, oligarchical way of getting things done, and Veliaj admits that he prefers to explain rather than consult. “I know it’s a cliche, but I really believe that if you build it, they will come,” he says.

He is especially proud of a scheme to encourage citizens to plant trees, either for their birthdays or as memorials. Having easily overshot an initial target of 100,000, the city has set up a department aimed at encouraging the public to plant the planned orbital forest themselves.

As one of Europe’s poorest nations, Albania is unable to raise much on the open market and the city has to resort to private public partnerships (PPP) to fund its projects, which Veliaj admits is controversial. For example, in exchange for building the new football stadium, the developer has been allowed to build a 25-storey hotel next door to it.

Rapid population growth has also left Tirana chronically short of schools. PPPs are financing a massive programme to build new ones, several of them designed by Boeri and the British architect Nicholas Grimshaw. Under the PPP scheme, the developers raise the capital while the city pays them back in instalments, with interest.

Zana Vokopola, director of the Urban Research Institute in Tirana, is among those with reservations about the use of PPP for public services. “PPPs are generally used for the construction of infrastructure that generates revenues, so you are able to pay the debt in good time,” she says. “They are rarely used to construct public services that usually don’t create revenues, and as such the debt remains for future generations.”

There are also questions about where the money is coming from. “Huge areas of Albania have been planted with marijuana, so there’s a lot of money that needs to be laundered,” Mema says. “A lot of people suspect that what lies behind some of these big projects is an attempt to clean up the money, though I don’t think this has anything to do with Veliaj, I really don’t.”

Gjergji Bojaxhi, who ran against Veliaj in 2015, asserts that “most of the development in Tirana is driven by money from the informal economy. In a country where the rule of law and justice system has failed, having been captured by the political class, real estate is king.” 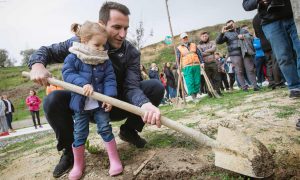 Not surprisingly, Veliaj refutes this and insists that all the finance used in PPPs is subject to rigorous monitoring – and laments what he calls the “national sport of cynicism and conspiracy theories”. Nevertheless, corruption and a lack of transparency have been cited as two of the main obstacles to Albania acquiring EU membership.

And despite his many critics, in the course of several hours strolling around the city, every other person wants to shake Veliaj’s hand or have their photo taken. Much of Boeri’s masterplan may go the way of its predecessors, but in the meantime, Veliaj’s high approval rating ahead of next June’s election suggests he is doing something right.

While emigration remains high, Tirana is full of young people who have now returned after spending years working and studying abroad. Veliaj himself left Albania 20 years ago to study in the US, returning to Tirana definitively in 2002. Now he sees his aim as transitioning out of the city’s chaotic past and into the future “through exemplary urban design”.

“Tirana is a great, vibrant city which nevertheless has struggled with the transition from being the centre of an isolated regime to the cosmopolitan cultural capital of the Balkans,” he says. “We want to help it through the final stages of its transition and to make up for lost time …

“Me and my team made our choice the day we took that flight back home: modernise this place at any cost.”

Published by “The Guardian”