In the framework of International  Museum Day in May 18, the National History Museum in cooperation with the Directorate of Cultural Heritage and Tourism in the Municipality of Tirana will organize the project “Moving Museum” starting today. An ordinary bus will be turned into an exhibition where students of rural Tirana schools will get acquainted with the history of some of the Albanian cultural heritage sites.

The “Moving Museum” exhibition features items from museum collections stored in National History Museum archives, which belong to different historical periods. Among them are vases from antiquity, portraits, cult objects, musical instruments, folk costumes etc. The first stop today was at the Administrative Unit Berzhite at its middle school with the same name. The National History Museum writes that this activity aims to involve the communities in the development of cultural policies in order to improve the quality of cultural life in Tirana and throughout Albania. “Through this project, the collection aims to become known to a wider public to make a more meaningful connection with the object while at the same time contributing to strengthening the museum’s identity, including cooperation with citizens, the community and society in raising awareness in young people for the preservation of our cultural heritage,” the museum wrote in its announcement. 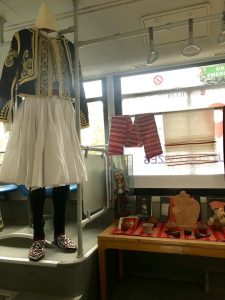 On May 17 the Museum will be also organizing two more events within the framework of the International Museum Day. One of the event will be an exhibition with children’s paintings on the topic “Cultural Heritage” which comes in collaboration with the National Cultural Center for Children. The other event will be the International Scientific Conference : “The face of ‘People’s Enemy’ during the dictatorship of the proletariat in Albania 1944-1990.” This conference is organised in collaboration between the Authority for Information on Former State Security Documents,the National History Museum, the Institute of History at the Academy of Albanological Studies, the Institute for the Studies of Communist Crimes and Consequences in Albania and the Institute of Integration of the Former Political Persecuted, and will take place at the UNESCO hall of the National History Museum at 9:30 am.

The National History Museum was inaugurated on 28 October 1981. For the establishment of this museum was gathered a team with the best specialists of the country in the fields of history, linguistics, archeology, ethnography, cartography, architecture and art. It was worked for almost three years in an organized manner for building this museum until its opening, according to the respective sections. The group was headed by distinguished personalities such as Aleks Buda, Stefanaq Pollo, Selami Pulaha, Skënder Anamali, Emin Riza, Burhan Çiraku, Kleanthi Dedi, Iljaz Goga, Rrok Zojzi, Abaz Dojaka, Ramadan Sokoli, Enver Faja, Nina Shehu, Vilson Kilica, Fatmir Haxhiu, Myrteza Fushekati, Met Deliu, Aleksander Meksi, and others. The National History Museum is the largest museal institution in Albania and one of its most important. There are about 5000 objects in the museum’s premises, which belong to a relatively long period of time, beginning in the IV century BC and until the second half of the 20th century.